I’ve been tracking what I call human singularities—people who embody rare and extraordinary talents—like Joseph of Copertino, or Arigo, or Lurancy Vennum, etc.. I’m trying to paint a composite picture of what I believe is our latent super-humanity. All the strange manifestations must have some purpose, some meaning.

There is reason to doubt that we--as a species--have reached the climax of our full evolutionary potential. Far from it!  Look around at the world—the greed, the violence, and the stupidity spreading havoc and mayhem everywhere. The growing dangers of social instability, risk of nuclear war and oncoming eco-catastrophe cry out for sweeping change. 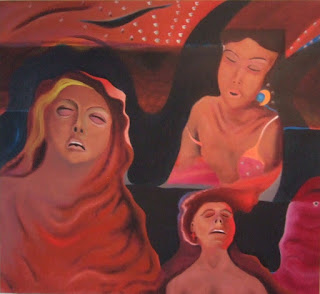 Politics alone—without a deep collective change of consciousness—will never save us. The change we need is inner, psychic, intellectual, and spiritual. The good news is that there’s evidence for mutations of mental capacity of a very high order.

The question is, How to awaken these much needed, often ignored and despised potentials? It is worth noting that American popular culture is awash in images of supermen and wonderwomen.  In some way, perhaps, is the collective imagination priming us for some great transformation to come?

There is one key psychological mechanism. All the evidence points in one direction—the phenomena emerge when we’re in a state of ecstasy—beside our normal, everyday selves.  The psychological term for this is dissociation. Suppose you’re listening to music so intently that for a few seconds you cease being aware of your self.  That is the beginning of ecstasy. Going out of yourself—literally, “standing outside yourself.”  It’s a matter of degree. When a mystic like Joseph of Copertino got lost in music, you could set his robe on fire and he wouldn’t react! Probably the most reliable path to ecstasy is to be madly in love—but that is another discussion.

There are many ways to dissociate from all the distractions, ways to break into our deeper selves.  One is through mesmerism or, as we say today, hypnotism.  In 1784, the Marquis de Puysegur, an artillery officer who had trained himself in the methods of Anton Mesmer “took his freshly acquired skills to the provinces and began a series of animal-magnetic experiments that would change the course and the history of psychiatry and psychology.”[i]

The crucial discovery occurred when Puysegur “magnetized” (hypnotized) a twenty-three-year-old peasant, Victor Race, who was suffering from an infected lung, and putting him in a state of consciousness with unique characteristics.  Puysegur called this state “magnetic sleep.” But magnetism had nothing to do with this newly identified state of mind.  So-called “magnetic sleep” is a state that seems to fuse the waking and subliminal mind; in other words, it’s a technique for breaking the spell of our everyday mental habits.

During this strange sleep-walking kind of consciousness, the subject may find himself in telepathic rapport with the magnetizer, and in a highly suggestible state.  Upon returning to his waking self, Victor forgot everything that occurred while ‘magnetized’; it appeared as if he had become two persons.

But here is the big point. The most striking change that Puysegur noticed about Victor was the change in his personality.  He wrote that in a “magnetized state, Victor is no longer a naïve peasant who can barely speak a sentence.  He is someone whom I do not know how to name” (ibid.p.39).

In this new state of consciousness, Victor displayed extended cognitive powers, telepathic and clairvoyant. Puysegur’s work bore much fruit: a range of interesting effects were repeatedly observed.  For example, ‘magnetized’ somnambulists became proficient at clairvoyant diagnosis of bodily ills, their own and that of others, providing useful therapeutic recipes.  During this altered state the sick one becomes the healer, and here we have the seeds of a new health-care paradigm.

This is the important idea. Seemingly ordinary human beings may well possess extraordinary abilities, and by learning to enter into the right state of mind, each of us may tease out the hidden genius within.  Accidents happen all the time that force open these latent abilities in surprising ways: through near-death experiences, certain forms of autism, even, oddly enough, through head injuries or crises of loss of loved ones.

But must we rely on these unpredictable miracles of personal growth?  Why not reorganize society in ways that fully acknowledge our hidden human potentials? Why not design systems of education that promise to emancipate them? Failing to do any of these things, there remains the possibility that such powers may emerge through something like a global near-death experience. For discussion of that last somewhat grim possibility, see my book, The Final Choice: Death or Transcendence (2017).