Searching for the outer limits of human potential has taken me to some strange places.  The result has led me to wonder what it really means to be a human being. There are in fact disturbing signs that human evolution is not yet complete. Enough indications point to a possibly more evolved version of our species yet to emerge.  To help me understand what the possible future human might be like, I have focused on saints, yogis, mediums, shamans and mystics, unique individuals noted for their unusual abilities.  Piecing together these various abilities, a picture is beginning to crystallize. 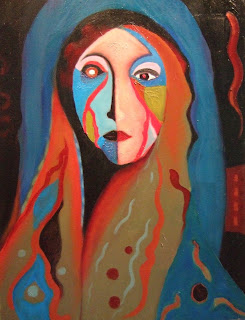 One of these unusual abilities is living without eating. This would surely be a sign of something new. The way life has evolved on earth requires that all living things feed off each other and must kill others in order to survive.  One could say that as a result of this arrangement life in a sense is a tragic phenomenon.  The idea of a life form that has transcended the need to kill would strike a new note in our idea of life on earth.

Apparently, some Catholic saints lived for prolonged periods with little or no food or drink, and in some cases, without that sure sign of nature, elimination.  Inediacs, people who live without eating, like Lousie Lateau or Mollie Fancher, are often bed-ridden and afflicted with numerous abnormalities.

Bt the most famous inediac of the 20th century was quite different. Therese Neumann, a Bavarian Catholic who lived through the Nazi era, was a visionary who displayed the stigmata. (See my painting of her.) Because of a muscle spasm in her throat in 1922, she stopped eating solid food; by 1926 all she could manage was to drink a few drops of water.  On August 6, 1926, she had a vision of Christ’s Transfiguration; hunger and thirst permanently left her.  By 1927 she quit all forms of nourishment, except a daily eighth of a communion wafer.  She stopped eliminating, and continued in this state for the remaining thirty-five years of her life, according to the official account.

Exceptionally, she was not bed-ridden but healthy, energetic, and robust.  She lived very much a public life, made herself accessible to visitors, and was fond of nature and sight-seeing excursions.  Friends, family, and religious confessors never saw her eat despite spending hours working with her in the fields or going on outings with her that lasted for days.  Her brother said that despite the heat she never drank or showed signs of fatigue. Witnesses swore to all this under oath, and there are no reasons I’m acquainted with that suggest they conspired to mislead the public or were driven by unconscious forces to prevaricate.

Naturally, one wonders whether Therese ate or drank on the sly.  To make sure this was not the case, and in response to widespread requests to test her, she consented to being observed in July, 1927, by a medical commission and four Mallersdorf nurses whose veracity was placed under oath.  She was intimately probed and carefully observed for fifteen continuous days and nights.  At all times she was under observation by at least two nurses.  Powerful arc lamps beamed 5000 watts in her eyes to test the authenticity of her ecstasies (she showed no reactions).  She lost about eight pounds after her stigmata bled but by the end of the experiment her weight was somehow restored.
Only by assuming a wildly improbable conspiracy can you doubt the conclusion: for fifteen days she drank and ate nothing but tiny shards of the Eucharist wafer.  So well known was her inediac lifestyle that during the war the Third Reich gave her no food rations.

There are other spectacular cases of impossibly long fasts in other cultural traditions.  My aim here is to give one example of a so-called “miracle” that is part of a pattern.  The pattern of these miraculous phenomena is the real story and what it suggests for the future of human evolution.  I am working on a book that explores this theme of “miracles” as signs of the future of human evolution.  At this juncture of life on planet Earth being menaced by climate catastrophe and global wars, any grounds for hope in the creative advance of our species should be of some interest.  I will return to this theme, and I invite your thoughts on the subject.